A Pulitzer Prize-winning journalist tells the story of the self-made billionaire who built the Kendall-Jackson empire from nothing into the biggest-selling brand of premium wines in the U.S.

Jess Stonestreet Jackson was one of a small band of pioneering entrepreneurs who put California’s wine country on the map. His life story is a compelling slice of history, daring, innovation, feuds, intrigue, talent, mystique, contrarianism, and luck, offering a unique window on the elegant, adventurous, and cut-throat worlds of Jackson’s two passions: wine and horseracing.

Time after time his decisions would be ignored, derided, then finally envied and imitated, as whole industries watched him become a billionaire and tried to keep up. He reinvented himself at mid-life, and became founder and CEO of Kendall-Jackson. The empire he constructed endures and thrives even after his death in 2011. In A Man and His Mountain,Edward Humes brings us the no-holds-barred tale of the brilliant, infuriating, successful man who seemed to win more than his share by staying far ahead of the pack.

₦1,800
Get Audiobook
The Pixar Touch : The making of a company.
The Pixar Touch is a lively chronicle of Pixar Animation Studios' history and evolution, and the "fraternity of geeks" who shaped it. With the help of visionary businessman Steve Jobs.. 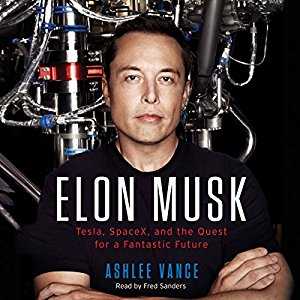 ₦1,800
Get Audiobook
Elon Musk: Tesla, SpaceX, and the Quest for a Fantastic Future
In the spirit of Steve Jobs and Moneyball, Elon Musk is both an illuminating and authorized look at the extraordinary life of one of Silicon Valley’s most exciting, unpredictable, and ambitious entrepreneurs – a real-life Tony Stark – and a fascinating exploration of the renewal of American invention and its new makers. Elon Musk spotlights [...]

₦1,800
Get Audiobook
Why Nations Fail
Why Nations Fail?answers the question that has stumped the experts for centuries: Why are some nations rich and others poor, divided by wealth and poverty, health and sickness, food and famine?

₦1,800
Get Audiobook
13 Bankers: The Wall Street Takeover and the Next Financial Meltdown
Even after the ruinous financial crisis of 2008, America is still beset by the depredations of an oligarchy that is now bigger, more profitable, and more resistant to regulation than ever. Anchored by six megabanks, which together control assets amounting to more than 60 percent of the country’s gross domestic product, these financial institutions (now [...]

The Creature from Jekyll Island: A Second Look at the Federal Reserve

₦1,400
Get Audiobook
The Creature from Jekyll Island: A Second Look at the Federal Reserve
This classic expose of the Fed has become one of the best-selling books in its category of all time. Where does money come from? Where does it go? Who makes it? The money magician’s secrets are unveiled. Here is a close look at their mirrors and smoke machines, the pulleys, cogs, and wheels that create [...]
-20%

₦2,000
Get Audiobook
Driving Honda
For decades there have been two iconic Japanese auto companies. One has been endlessly studied and written about. The other has been generally underappreciated and misunderstood. Until now.
-32%

₦1,800
Get Audiobook
Insanely Simple: The Obsession that Drives Apple’s Success
As ad agency creative director, Ken Segall played a key role in Apple?s resurrection, helping to create such critical marketing campaigns as Think Different. By naming the iMac, he also laid the foundation for naming waves of i-products to come.
-33%

The Power of Gold

₦1,350
Get Audiobook
The Power of Gold
“The need for realism in reform of its monetary system is what makes Bernstein’s story of the Power of Gold so timely. It is a compelling reminder that maintaining a fixed price for gold and fixed exchange rates were difficult even in a simpler financial environment. Peter Bernstein was reluctant to project the story of [...]
-3%

₦1,800
Get Audiobook
Money and Power
A?revelatory history of Goldman Sachs, the most dominant, feared, and controversial investment bank in the world.....